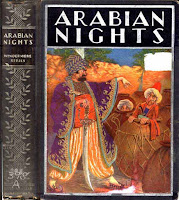 At the time, it seemed very large and it was quite heavy. It was a hand me down, from someone who obviously didn't live or breathe to read. It was a very old edition of the 1001 Arabian Nights.

The book was unforgettable in so many ways.
It was so heavy that my two little hands would ache just by carrying it around.
It was perhaps as old as the Arabian Night stories. The pages were yellowed and frayed at the edges, the spine was almost coming off and the book had an 'old book' smell to it, if you know what I mean. Most book lovers will recognise the musty odour of an old book.
But even inspite of its sad condition, it was the most beautiful book to me. A sky-blue hard bound cover, approximately a foot long and two inches thick, the book had the most beautiful hand drawn illustrations.

I must have been five or six when my mother gave me the book. At the time, I was just about beginning to decipher the alphabet. My mother would read parts of it every night and the unread parts, well, I would only imagine those with the aid of the lovely paintings in the book.


A few months later, I began to read on my own. The book was so special to me in so many ways. I was an only child and that book was my first friend in times when my parents were at work and there was no one else to play with. I travelled continents, made friends with imaginary princes and princesses, empathised and lauded Princess Scheherazade and hated King Shahryār with the same aplomb.

And simply becuase it was so large and there was so much to read, the book stayed with me for quite a long time. I read it from cover to cover, not once, not even twice, but many many times. At the time, I knew each picture and sketch from the wonderfully detailed book.

As time passed on, as it always, I graduated from the Arabian Nights to Enid Blyton and then Nancy Drew and then Hardy Boys, Sidney Sheldon and then many many more. Gradually, the book, heavy as it was, it stayed in some dusty corner of our attic and honestly, I don't even know what happened to it. Perhaps it turned to sand, like the landscape of much of of its stories...or became food for the hungry rats which always seemed to thrive in my attic. Perhaps my mother handed it over to someone else who would be influenced by the rich tapestry of the story telling and go on to dream many technicoloured dreams like I did. I don't know.


But one thing remains for sure. My first book, the torn and tattered 1001 Arabian Nights, it laid a foundation of vivid imagination and multicoloured dreams, the carpet on which I still fly around to this day.

NOTE:
1. This post was inspired by the IndiSpire edition 164 of Indiblogger.in. "Which is the first book you read all by yourself, and what happened to you after that?" #MyFirstBook
2. Pictures are courtesy of The Project Gutenberg website on which a copy of the 1001 Arabian Nights resides for free reading.
You can click this link to read this lovely book. http://www.gutenberg.org/files/19860/19860-h/19860-h.htm
at March 30, 2017